This horseradish cheddar cheese is an unusual twist on traditional cheddar cheese, and easily made with our step by step tutorial with pictures! 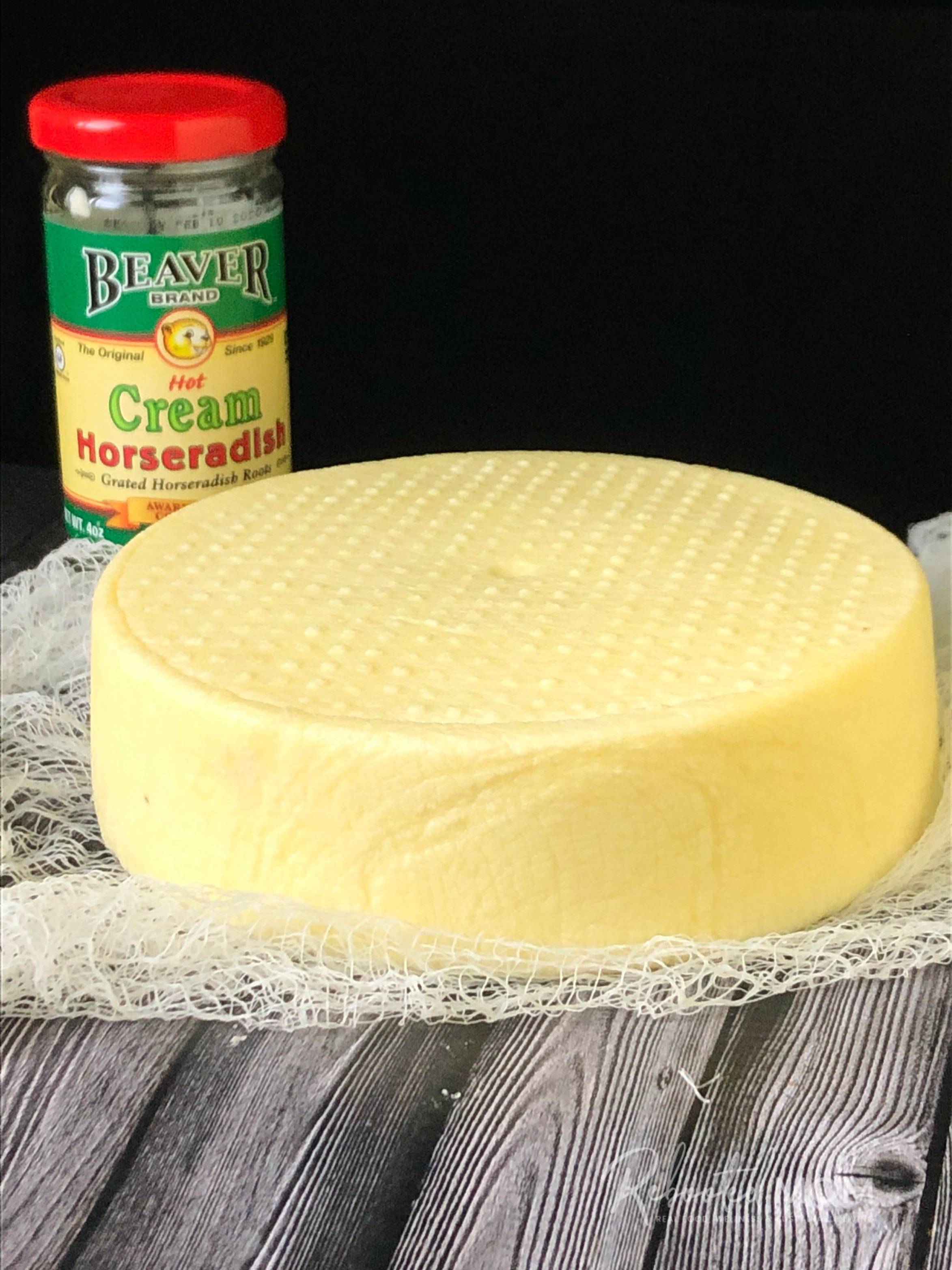 It has been about 8 months since I caught the cheesemaking bug.   Making your own cheese is incredibly gratifying.  I started with soft cheeses like paneer and queso fresco,   After those, I moved on to homemade cream cheese, Monterey Jack and even Beer Soaked cheese.

Two words: SO delicious! And also so rewarding!

But my favorite cheese yet has to be this horseradish cheddar.

This horseradish cheddar cheese is one of the best cheese recipes I’ve tried yet. After making my first several weeks ago, I was blown away with the flavor profile of the cheese and decided to make another. Horseradish itself is spicy… but combined with cheese is UNBELIEVABLE.

Even if you can’t handle spicy horseradish on its own, you’ll find that eating it as a cheese infusion is much more tolerable.

What is Cheddar Cheese?

Cheddar cheese is an off-white or orange colored hard cheese that originates in Somerset, an English village of Cheddar.  This particular cheese is such an important part of cheesemaking — it accounts for over half of all British cheese sales at a whopping 52%. 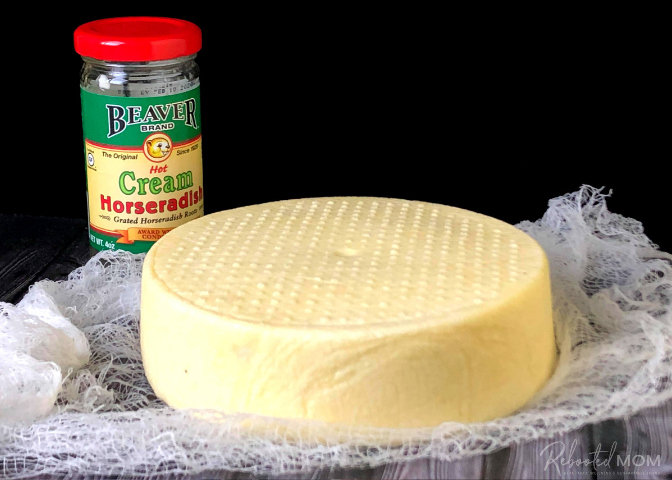 Cheddar is a cows milk cheese that ranges in taste from mild to sharp depending on the length of aging and origin.   Horseradish cheddar is by far one of the most flavorful cheeses I have tried yet – the flavor is out of this world!

Cheddar Cheese should be stored in a cool area – or a cheese fridge (wine cooler) where the temp remains around 50-55 degrees consistently.  The cheese can be aged from 3 months to 7 months. The longer it ages, the more dry and crumbly it will become.

If aging, it’s important that you turn the cheese every other day in the first month, then once a week for each month remaining. Or, once you are done pressing your cheese, allow it to dry to the touch and then vac seal it.

Vac sealing doesn’t require you to wax the outside.


I have an inexpensive vacuum sealer from Amazon that uses regular FoodSaver bags (you can often times pick them up on sale).  It’s not overly expensive and it works beautifully.

Before you get started, make sure you have ample time at home without interruption.  I like to start my cheese recipes early  in the morning, that way I’m done by dinner (or at least have it in the press by then).

If it’s a day that I have lots of obligations (lessons, practice) I’ll usually hold off until the next day. There is nothing worse than starting cheese and having to leave or rush through it – because it really can’t and shouldn’t be rushed at all. 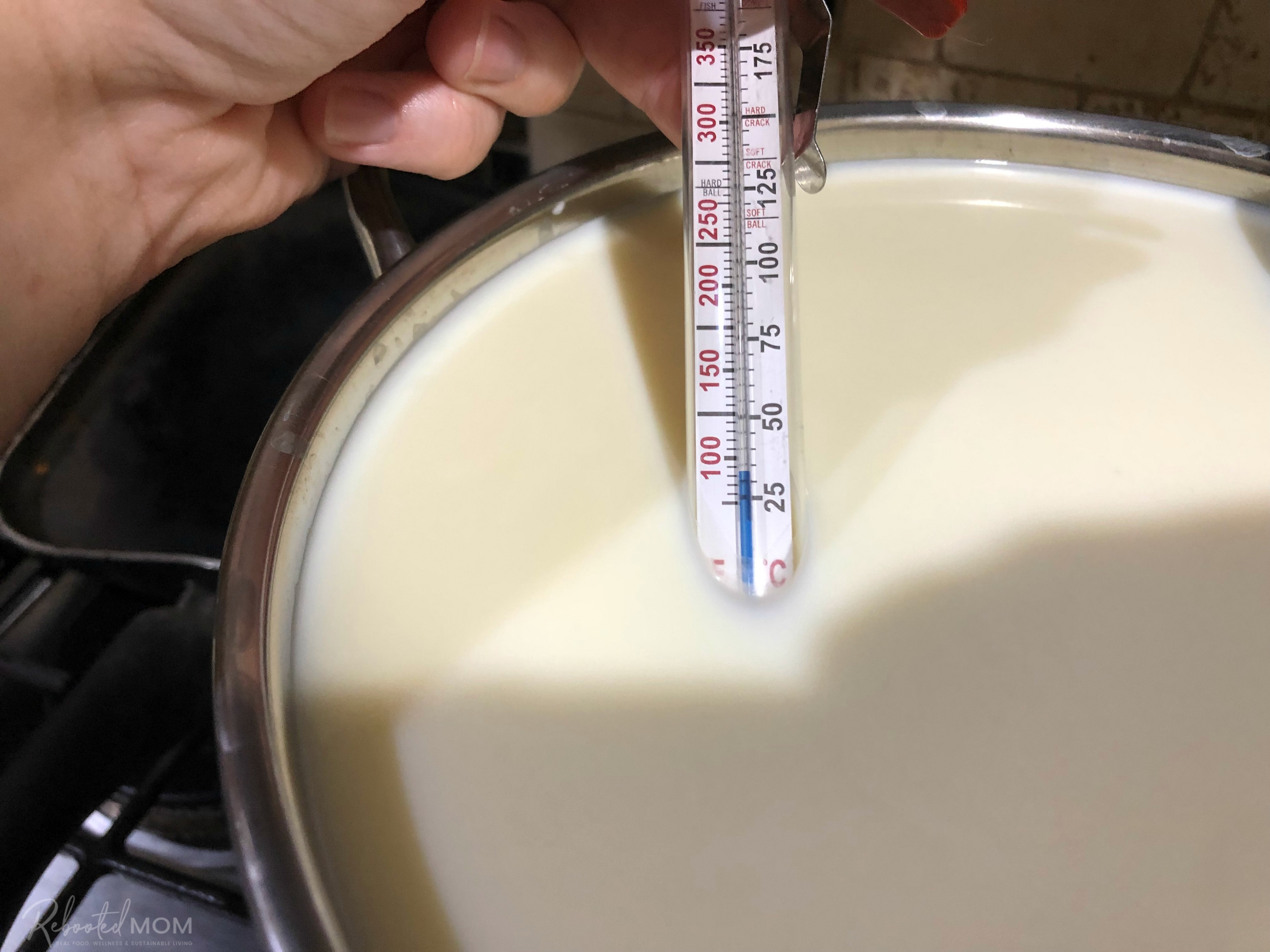 Before you start, make sure that the pot, spoon, knife, mold and cheesecloth are well sterilized.

Start by pouring your milk into a non-reactive stainless steel pot. Clip your thermometer to the side of the pot, or better yet, invest in a digital thermometer.

With the heat on low, gently bring the milk to a temperature of 92 degrees F. 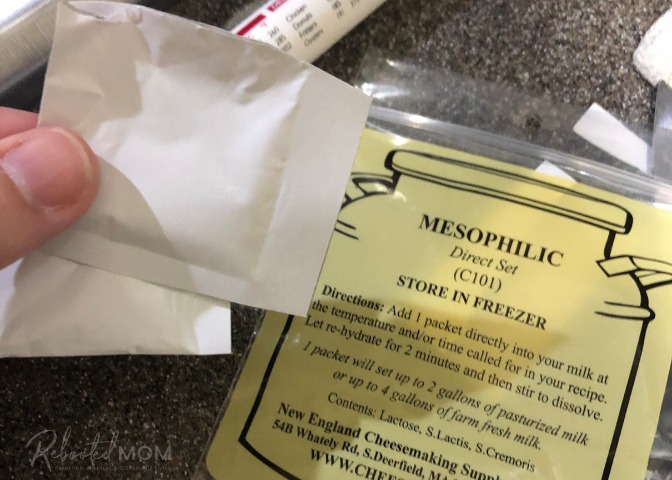 Turn the heat off. Sprinkle your packets of mesophilic culture on the surface of the milk. Allow that culture to remain on the surface for a minute or so. Then stir gently with an up and down motion for 30 seconds.

Place the lid on the pot and let it rest for 45 minutes. 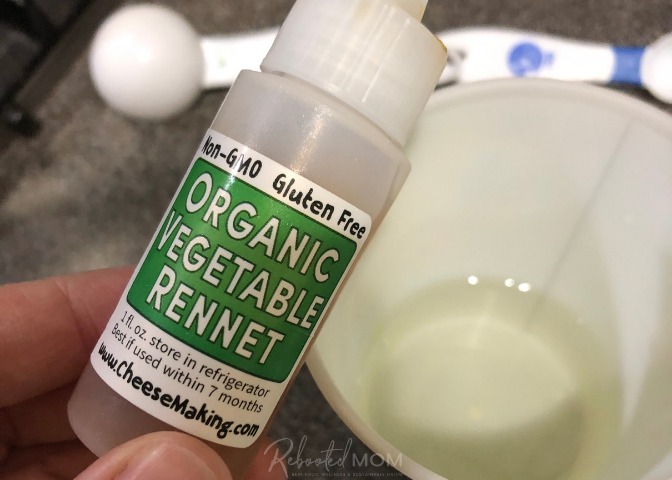 Stir in the Rennet

Gently pour that in to the pot.  Stir with an up and down motion for 30 seconds. Stop stirring, and cover the pot again – allow the pot to sit, undisturbed, for 45 minutes. 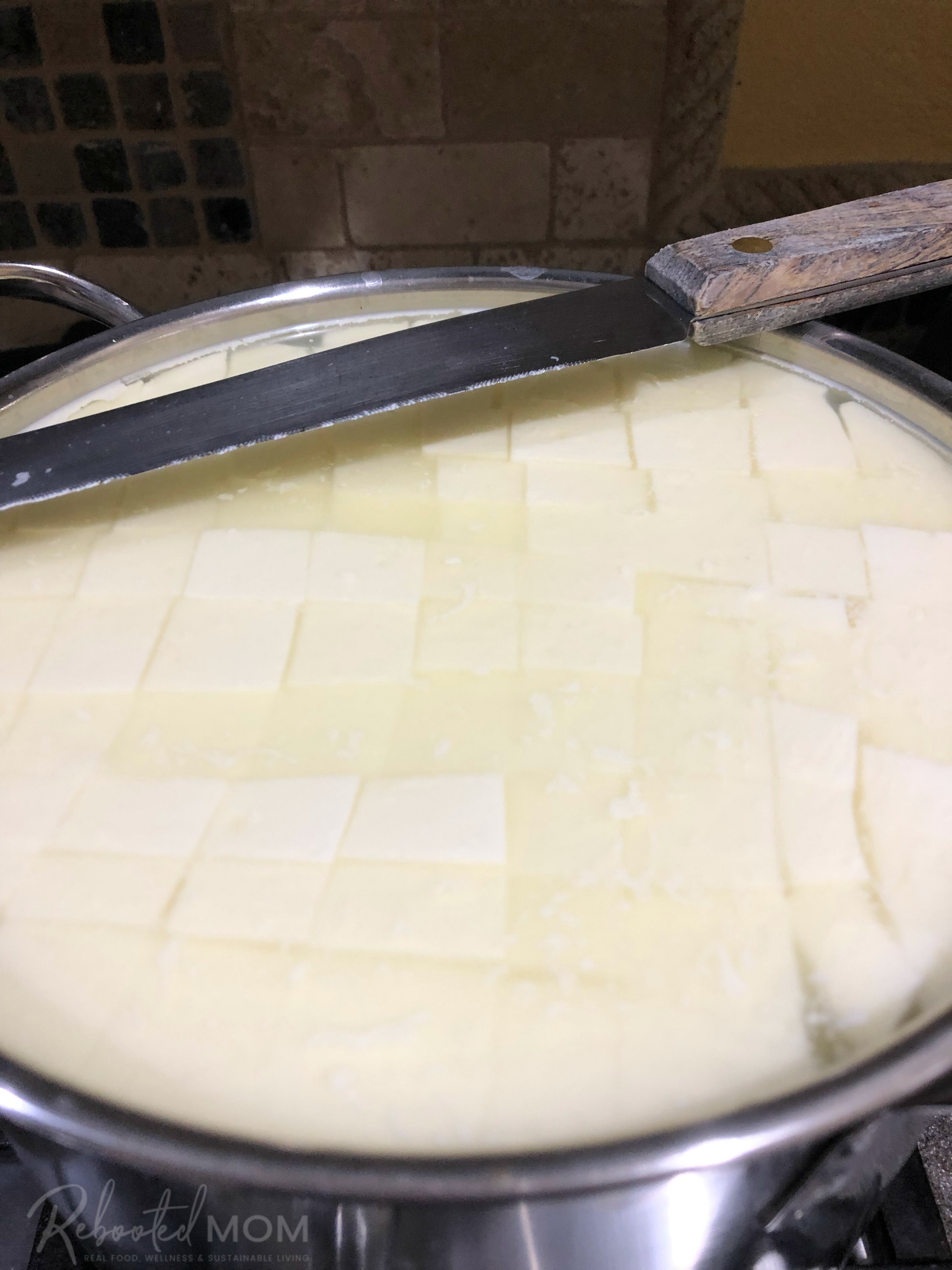 After 45 minutes, cut the curd into a checkerboard pattern at 1/2 inch intervals. The curd should give a clean break.

After the curds are cut, allow them to rest for 5 minutes. 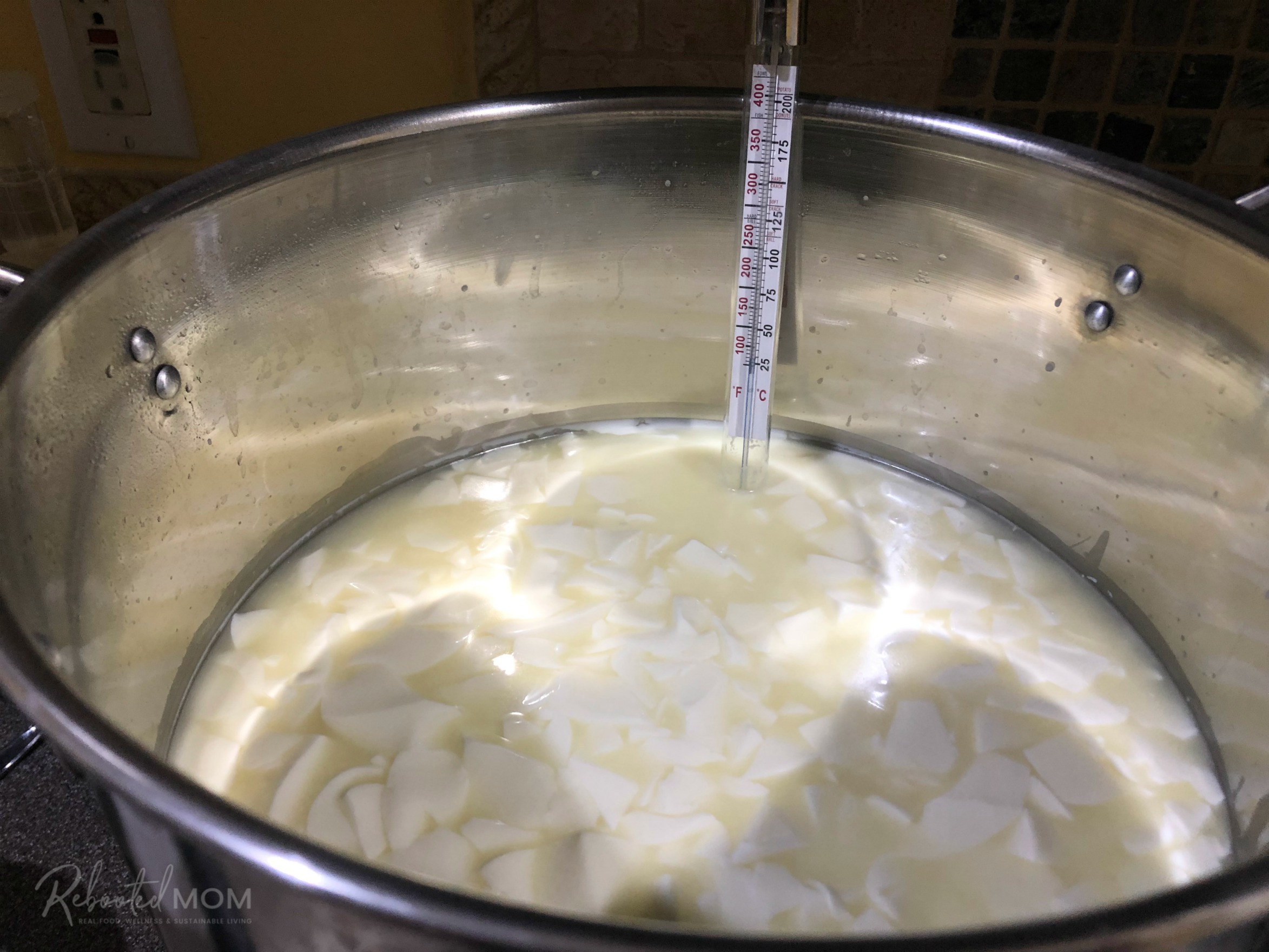 Now that the curds have been off the heat for a considerable time, it’s time to heat them up. Fill up your sink with water that is 105 – 110 degrees F.   Carefully your pot of cheese curds in the sink. This will heat the curds up to 100 degrees over a period of 30 minutes.

(When I use the sink, I have to monitor closely as well. I tend to fill the sink halfway with warm/hot water, then add cool water because the temp tends to rise quite fast).

Or, alternatively: turn the stove on low and stir, stir, stir until the curds reach 100 degrees F. The caveat is that you don’t want this to happen too quickly. You might need to alternate turning the stove on (low) and off while stirring to gradually reach that temperature.

Stir frequently to keep the curds from matting. As you stir, use the side of your spoon to slice any large curds in half that didn’t get cut evenly with the knife in the last step. 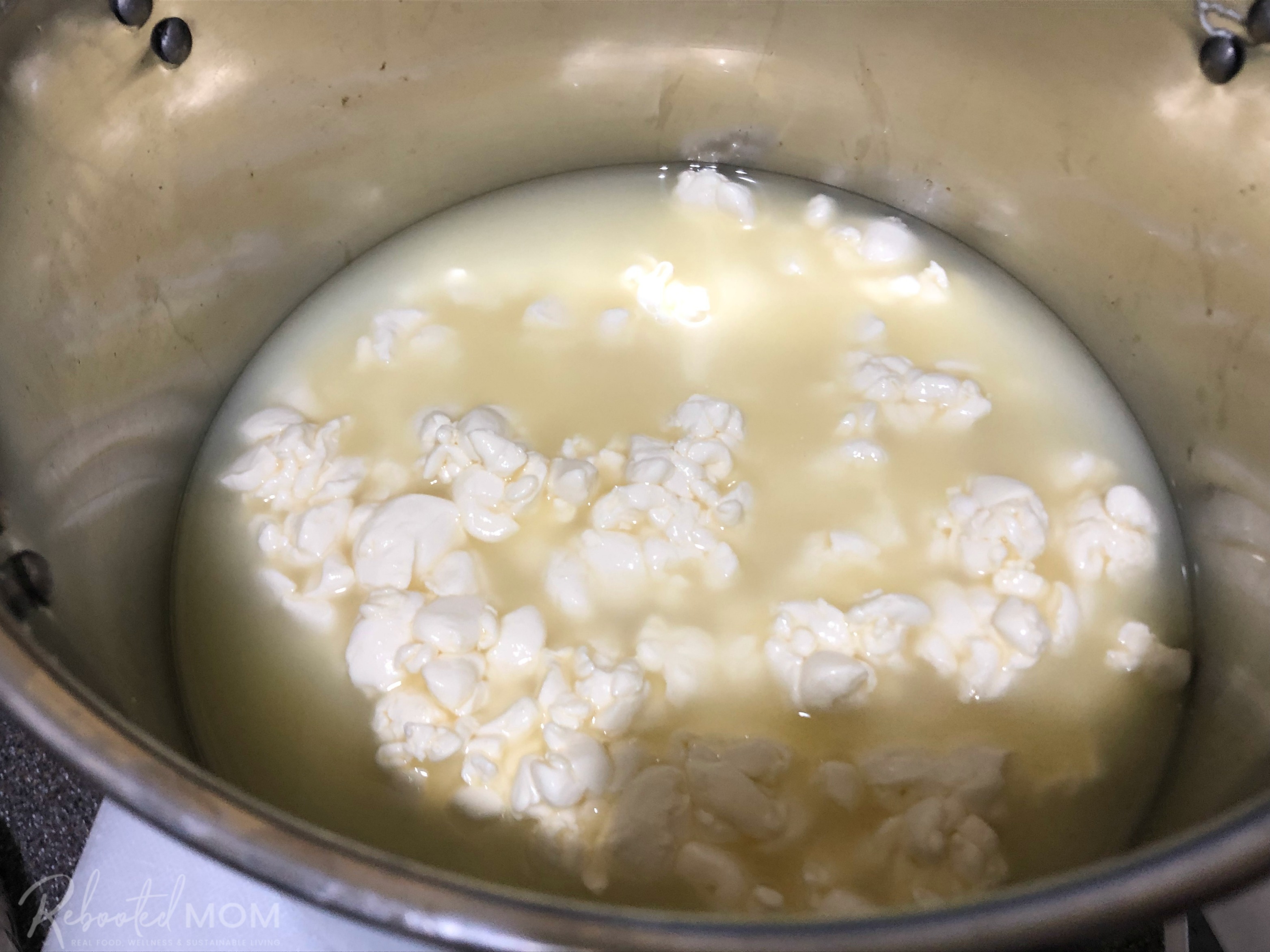 Cook the Curds and Drain the Whey

Once the curds reach 100 degrees F, keep them at that temperature for an additional 30 minutes. This can be tricky!  The temperature will definitely fluctuate – don’t worry.  Try your best to keep the curds at a consistent temperature.  During this time, the curds should sink to the bottom of the pot.

After 30 minutes, carefully drain off the whey. To do this, place a colander over a large clean pot. Slowly pour the curds over the colander, allowing the colander to catch the curds.

Allow the curds to rest in the colander for several minutes. With clean hands, break up the curds into even pieces (they won’t be perfect, but your goal is to break up anything that’s still larger than the others). 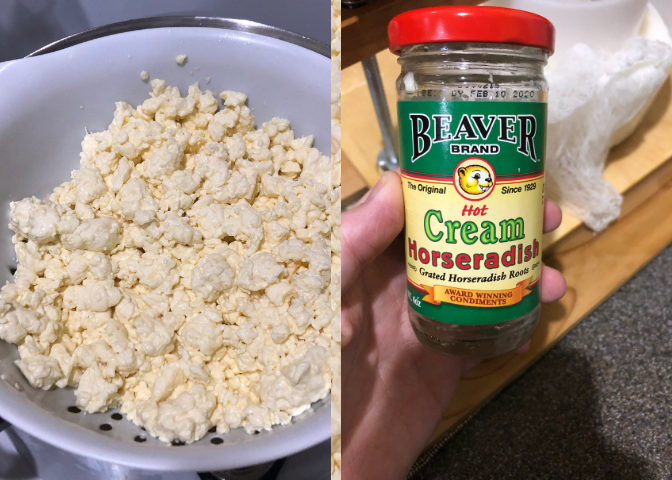 Add the Salt and Horseradish

Sprinkle your salt into the curds – it is best to do this in shifts. Work the salt through the curds with clean hands, making sure to turn the curds from the bottom of the colander to the top. Sprinkle the remaining salt and mix in with your hands until all salt has been added.

Once the salt has been added and blended in, it’s time to addd the horseradish.

Scrape the horseradish from the jar and add to the curds.  Using clean hands, work the horseradish through the curds to disperse evenly. You might have to do this in shifts – just like the salt. 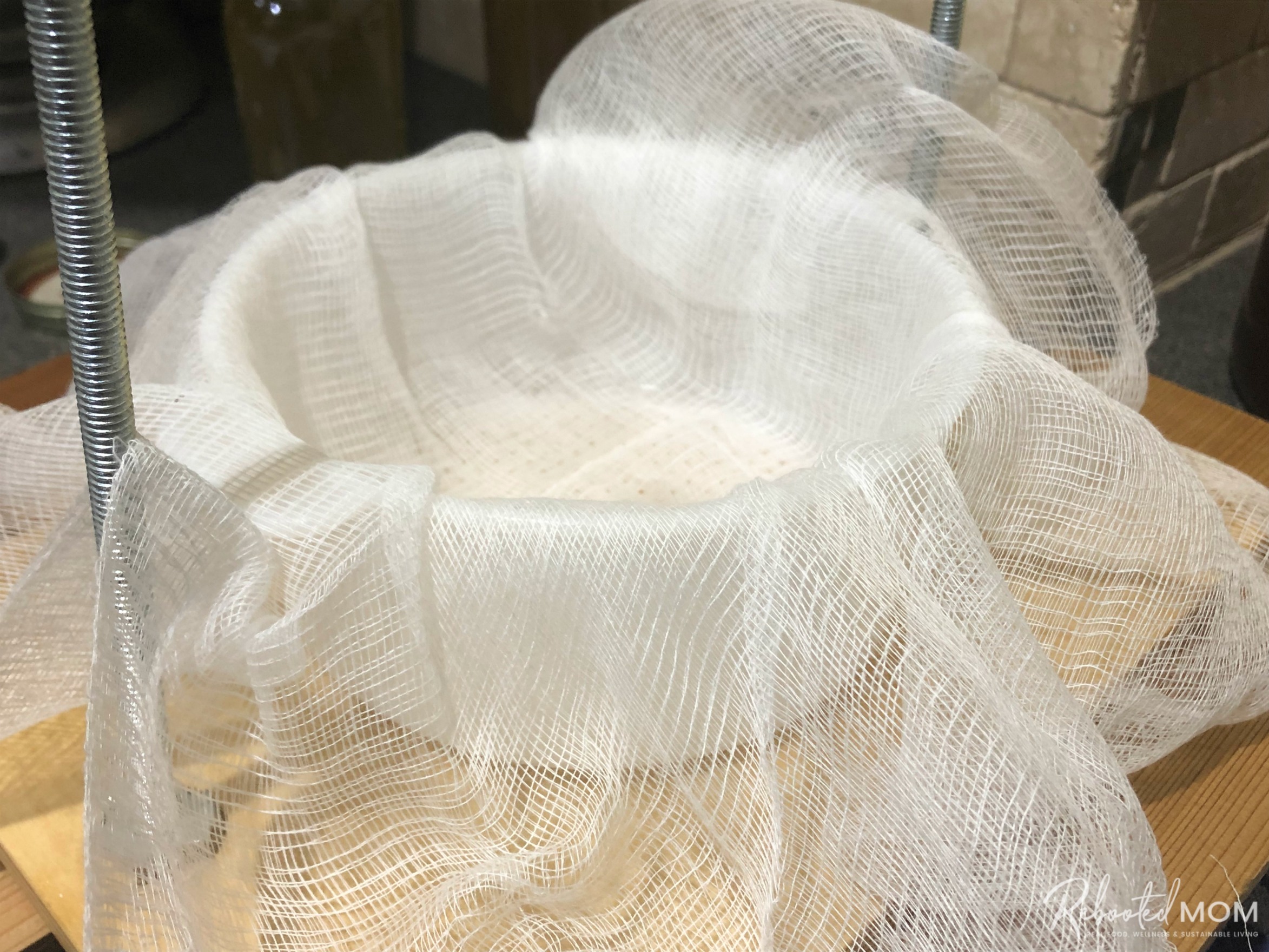 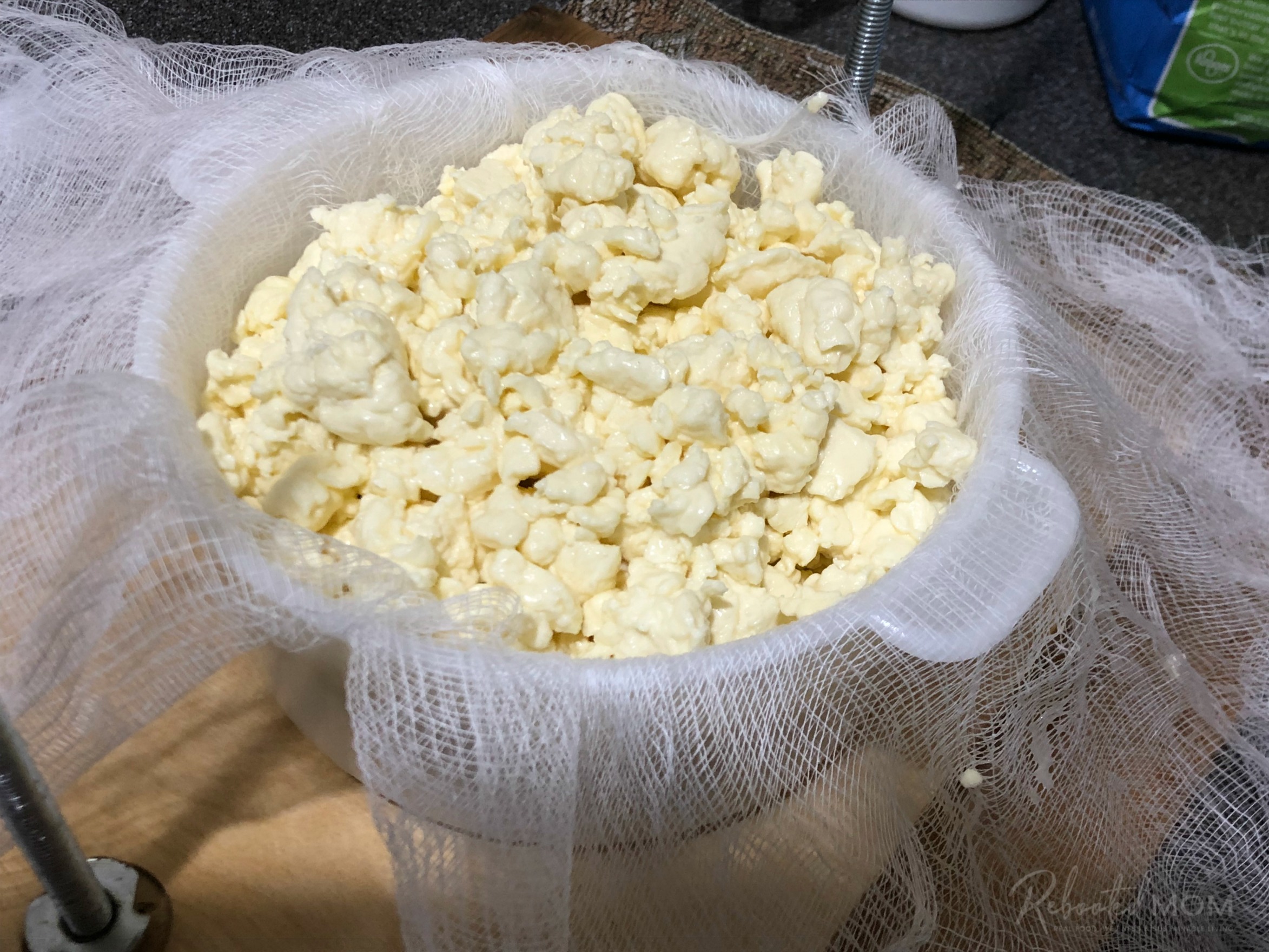 Once the horseradish has been added, line your cheese mold with cheesecloth. Make sure there is cheesecloth hanging over the sides of the mold.

Place the cheese mold on the press – without the weight. Carefully transfer the curds from the colander to the mold. Place the follower on top, then add your weights. 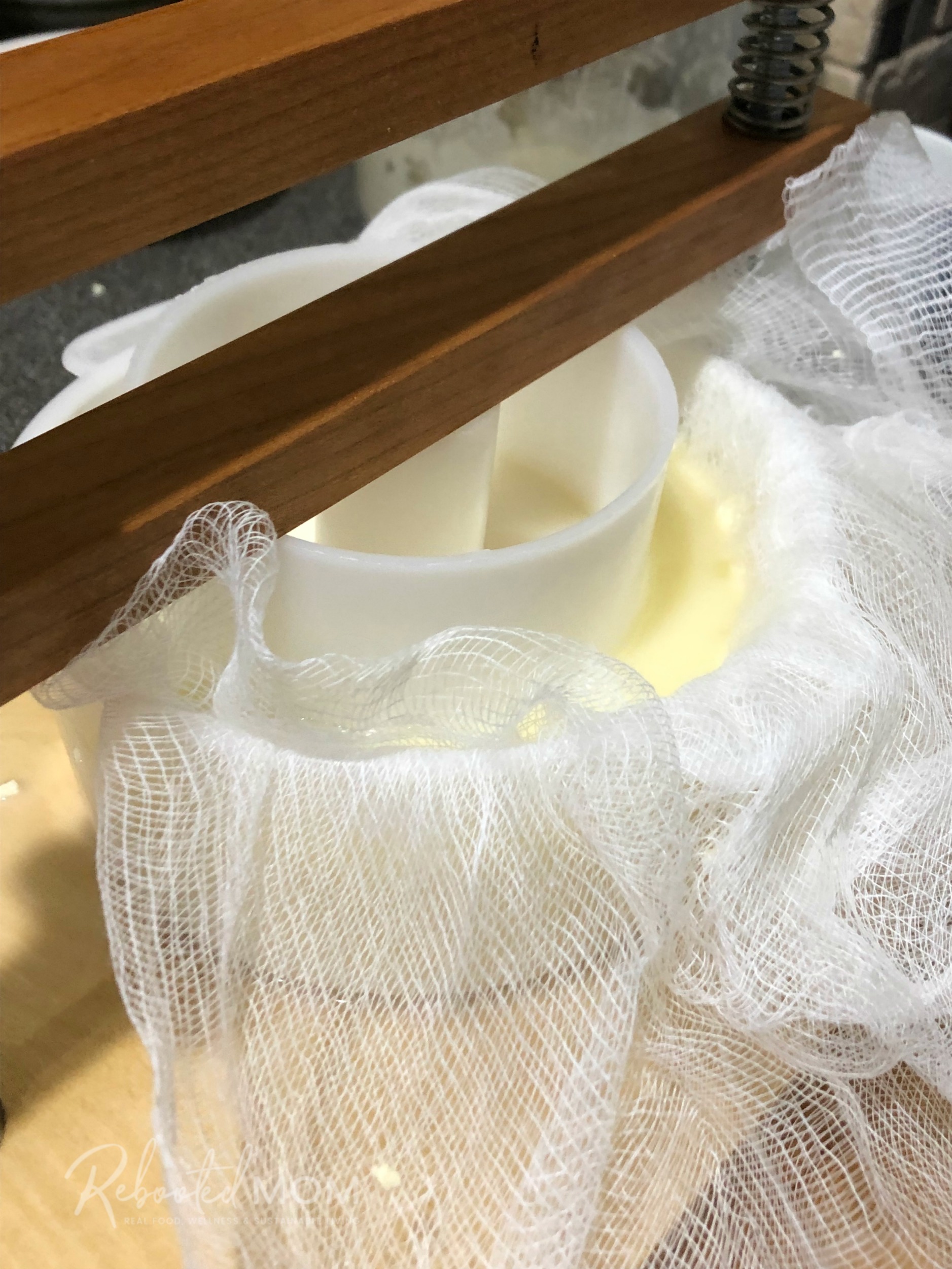 I suggest having something under the press to catch the whey. There won’t be a lot of whey expelled, but at first it will be a slow stream.

Once the cheese has pressed at 40 lbs for 20-24 hours, remove from the press. Carefully and I mean, carefully, unwrap the cheesecloth.  Allow the cheese to dry to the touch at room temperature before waxing.

It’s important that you do not let it dry  in a room that is too hot or dry. If you do, then it’ll get cracks on the surface of the cheese.

What I like to do is set it on a place atop of a clean piece of cheesecloth, then cover with a glass dish and set in the wine cooler for a few days. I turn it twice each day. Once it is dry, then I vacuum seal it and leave it in the cooler at a temp between 50-55 degrees.

*A Note About Vacuum Sealing Cheese

If your horseradish cheddar cheese is vac sealed, check routinely for moisture in the vac seal  bag. If you notice an abundance of moisture, then simply open the vac seal bag, and allow the cheese to dry out a little more. During that time, cover it with a glass dish and allow it to sit in the wine cooler to prevent the heat from cracking the surface.