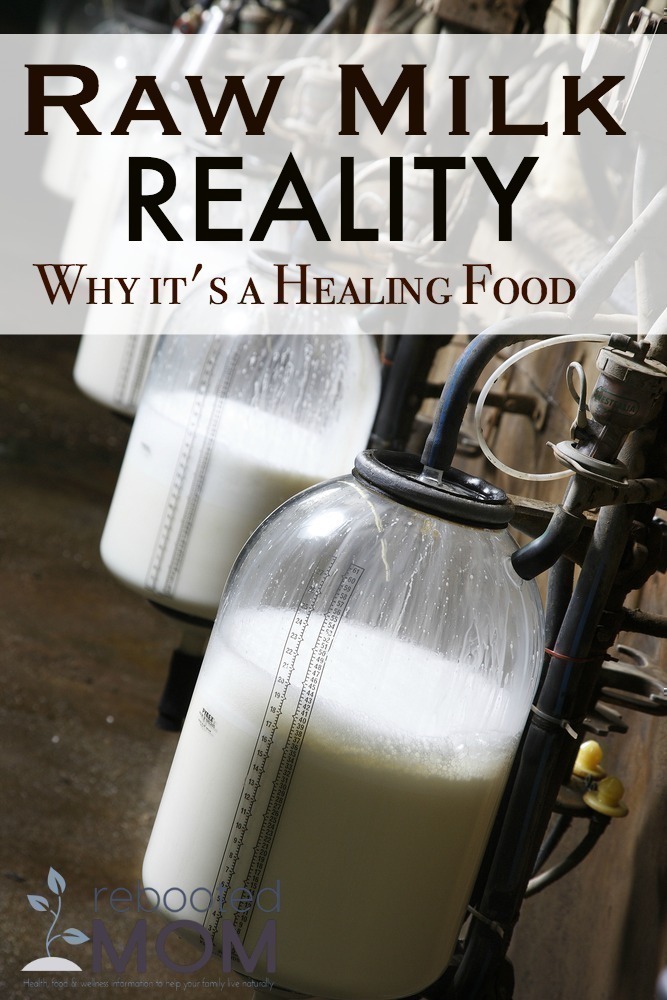 Have you ever considered drinking Raw Milk?

In the last 10 years … we went from processed, grocery store milk to Organic Milk – and we thought we were making such a healthy choice for our family.

Then, we took it up a notch and went with Raw Milk – several years later it takes up a permanent spot in our refrigerator, and it’s one of the best best choices we have probably made thus far.

Is Milk Really All that “Bad?”

Usually when you talk about Milk ..there is a perception that it is poor for the body – and to a certain extent that holds some weight.  The processed milk produced commercially today is not really milk by the time it reaches the grocery store.

The majority of people out there today have little concept of milk in general – and that not all “milk” can be categorized equally.

Soy is something you need to avoid completely; while Almond and Rice are hold little nutritional value. The nutrients have been stripped, the water is thickened and sugar and nutrients are re-added.

97% of the U.S. Population drinks processed, pasteurized milk – which is what you will find on grocery store shelves (Src). Some is regular ($1.89 at our local stores) and some is Organic – no matter the price, it’s ALL pasteurized – which means, it’s heated up to high temperatures to kill bacteria.

Unlike raw milk, pasteurized milk has SO little to do with strong bones (and good health!)

Tell people you drink Raw Milk and they look at you like you are endangering your children. When you are expecting, and it comes up in conversation, the same result occurs: many are quick to jump on you for jeopardizing the health of your unborn child.

Never mind the fact that all the other stuff people consume in and on their body is pretty harmful, but those who chose something nutrient dense are making an incredibly poor choice.

Raw Milk is NOT Pasteurized OR Homogenized.    Raw Milk leaves the good bacteria in tact – whereas conventional milk is pasteurized to temps that destroy some of the BEST nutritional benefits of cow’s milk.  It’s heated to 165 – 185 – Ultra High Pasteurized is heated to higher temps to make it last longer. Ever noticed the Sell By date on the O Organics Milk at Safeway? It’s dated VERY far out.

Just like baby food is heated to high temps to allow jars to sit on shelves for years at a time, milk is squite similar – heating destroys most of the valuable nutrients – if not all. What’s left as dead and damaged cells remains in the milk as a byproduct and can lead to allergic reactions for many – some are lactose intolerant, and some people have to avoid milk altogether.

Pasteurization destroys part of the Vitamin C contained in Raw Milk. That same pasteurization leads to loss of phosphorus associated with calcium with allows setbacks in bone & brian formation.  Those effects are NOT associated with drinking RAW  milk, however, because those nutrients (vitamins, enzymes and bacteria) are ALL present.

Raw Milk Dairy Farms and Processed Dairy Farms are entirely different.  Processed dairy farms often times have unsanitary conditions and disease and infection risks to cows can be high – which results in illness, which also results in antibiotics in the milk (antibiotics are different from growth hormones..) – thus, the milk MUST be pasteurized to remove all that bacteria and contamination.   Inspection of dairy herds for disease is not required for pasteurized milk.

Between 85 – 95% of cows in the U.S. are raised in confinement.  Believe it or not, even Confined Animal Feeding Operations exist amongst Organic farms.

Non-Organic Cows are not eating clean feed. They are most often fed a diet of pesticide laden Genetically Modified Grain that is sprayed with glyphosate.   Organic {And Grass Fed} Cows are not given hormones, or antibiotics to boost production, so their herds will always usually provide a less overall yield of milk.

So what are some of the reasons to ditch your grocery store processed {pasteurized} milk and go Raw?  There are many!

Among CLA’s many potential benefits: it raises metabolic rate, helps remove abdominal fat, boosts muscle growth, reduces resistance to insulin, strengthens the immune system and lowers food allergy reactions. As luck would have it, grass-fed raw milk has from 3-5 times the amount found in the milk from feed lot cows (35)(36) (Source)

Since the milk is not pasteurized, enzymes are kept in tact – they are very beneficial to your body in that they help absorb nutrients.  Likewise, beneficial bacteria is also present – that bacteria (which is not in pasteurized milk) helps your body ward off infections and keeps you healthy.

Unlike processed milk, all 8 of the essential amino needed by the human body are found in raw milk.

Unlike processed milk, raw milk contains lactobacilli bacteria = which essentially digests lactose.  The regular pasteurization of milk kills both the harmful bacteria AND the good bacteria, good fats, vitamins, and enzymes that help you DIGEST the milk.  That lactobacilli bacteria is NOT going to be present in processed pasteurized milk – even IF it is Organic.

Pasteurization doesn’t differentiate between good and bad bacteria – it just kills it all.

Then, since all the “good” bacteria has been killed, they then re-add synthetic vitamins to refortify it. These synthetic vitamins are chemically created in laboratories – so they are far from being an original form of sustenance for your health.

AND, companies cannot add back in probiotics – therefore making processed milk hard to digest, and something to avoid if you are lactose intolerant.  Ever wonder why so many people are unable to drink milk?

It’s because all the enzymes and bacteria necessary to process that milk are not there – they have been killed.

But raw? They are there – and that’s why many people CAN drink Raw Milk without complications.

This survey has shown that 80% of lactose intolerant CAN drink and digest raw milk without problems.

#4 – Clean Milk is a product of Cows eating Grass, not Grain

Confinement cows are given high unnatural diets that are soy and corn based (which in most cases are pesticide ridden) – they seek to increase milk production and severe illness results from environments of high stress (inhumane conditions – factory farming).

Grass fed cows that are pasture raised are fed on their natural diet (grass, cow friendly foods) that are NOT laden with pesticide. They can graze on pasture all summer, and in months that it gets cold they can feast on hay.

If you were to leave a jug of regular milk or organic milk on the counter all day or, overnight (and I have… ) it goes bad by the next day. But with Raw Organic Milk … not so much the case!

You can use it to make everything from Kefir, to Butter, to Yogurt, Cheese & more.

Milk from grass fed cows contains many more healthy fats – including Omega 6 fatty acids  and fat soluble vitamins (A, D and K) and is rich in betacarotene.

Milk from pastured cows also contains an ideal ratio of essential fatty acids or EFAs. There are two families of EFAs—omega-6 and omega-3 fatty acids. Studies suggest that if your diet contains roughly equal amounts of these two fats, you will have a lower risk of cancer, cardiovascular disease, autoimmune disorders, allergies, obesity, diabetes, dementia, and various other mental disorders. (Source)

I’m not sure bout you, but I absolutely never, ever step foot in Walmart – it used to be where people raised their own food on small farms. Those who couldn’t would rely ON small farms for their own food (meat, milk, eggs).  Now, most of those small farms have been wiped out by a corporate America that is instead focused on huge profits at the sacrifice of quality.

Instead of raising their food on a small farm or purchasing from a small farm, they turn to Walmart for processed food.

The CEO’s of Dean Foods, Dairy Farmers of America and Land O Lakes oppose the competition from Raw Milk Farmers, because Raw Milk Farmers can get a higher price for their milk, while they reap huge profits. Want to make a difference in your local community? Then buy directly from your local farmer.

Once you have Raw Milk, you won’t be able to go back to anything else. It’s just that good.

So why is there so little support for Raw Milk?

I think you have to be willing to see that there is a HUGE door between food giants, agribusiness, pharmaceutical companies and the FDA.

The intent of the FDA is to have so much control over the food supply, and give that control to HUGE agricultural corporations that want to sell you junk and processed food because THAT is what keeps their costs low.

If the FDA was concerned about  the health of consumers, they would start putting warnings out about much of the processed food industry – instead in the U.S. Bovine Growth Hormone (which is banned in other countries) is completely legal here.

There is risk in many foods we find today – from lunch meat to cantaloupe, even the nacho cheese sauce you find in gas stations across the U.S.  Raw milk from a clean and well kept farm is important – it’s critical to know where your milk is coming from.

Where to Find Raw Milk

Want to buy raw milk? Find a local farmer in your area – just remember that each state has different requirements on the sale of raw milk, so you will want to check with your state to see if they allow.

You can look at LocalHarvest.org to find your nearest Farmer who sells Raw Milk; or you can call the Weston Price Foundation and talk to your local chapter leader to find out more.